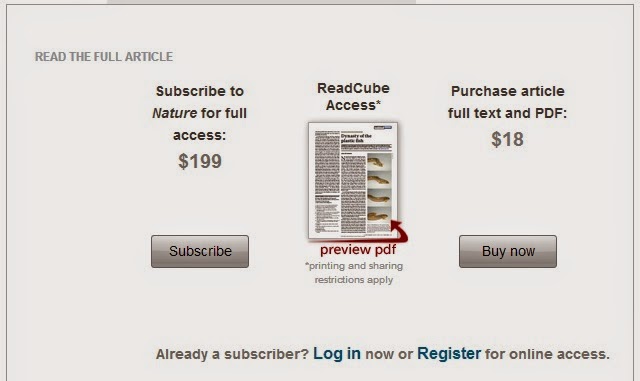 In celebration of OpenCon 2014, I thought now would be as good a time as any to wax poetic about my love for OPEN ACCESS!!!!!

According to the United Nations, all people have a "right to enjoy the benefits of scientific progress and its applications".   This was recognized in 1948 in the UN Declaration of Human Rights, but has received very little attention.

When I was submitting my PhD thesis to my university, I had to obtain permission to use my own research from the journals I had published in.  If my institution were smaller, or in a developing country, I may have had to pay to access my chapters.  In fact, there were definitely a few papers that were absolutely fundamental to my research that I could not access because my university had not purchased a license.  This traditional approach to scientific research may have worked when journals were printed (and therefore had manufacturing costs), but it is no longer relevant to modern publishing where everything ends up online.  Instead, the high cost of access limits the sharing of information, stunting scientific, medical, and academic research.  This is especially true in developing countries.

Scientific research and knowledge is created using taxpayer money, but it is not made accessible to the public for free.  Often, it ends up being translated by people who misunderstand it in the first place, or who are trying to get traffic to their sites.  Then we end up with a public who fears, demonizes, and/or misunderstands science, leading to unsound policies, public health crises, and more.  I hate to bring religion into this, but I can't think of a better example than Luther's vernacular Bible to illustrate my point: in 1534, Martin Luther published the Bible, translated from Hebrew and ancient Greek into German.  This made the teachings of the Bible accessible to all Germans, so that they could interpret them, think on them, and form opinions - it acted as a form of liberation for the German people (and also stimulated educational reform).  Prior to this time, the Bible had to be interpreted for people by priests, essentially telling them how to think and how to live their lives.  When knowledge is made publicly accessible, society is able to transform and grow.

The journal Science completed a "sting operation", sending a bogus manuscript rife with ethical and scientific errors, to a number of open access journals in order to expose flaws in the open access model.  The Science journalist John Bohannon reported that this bogus manuscript which he wrote was accepted into half of the journals, with either no peer-review, or with the promise to publish the paper even if the peer reviewers raised serious questions about the work.  The idea was that because authors pay to print in open access journals, the journals will print anything as long as they're paid.  However, the problem with this whole thing is that there is no comparison of the quality control process with traditional, closed-access journals; rather, Bohannon has raised points about flaws in the peer-review process and the journals-as-knowledge-gatekeepers system.  Let's not forget that a few traditional (and prestigious) journals have had some serious problems lately with fabricated results that have led to very public retractions.  I think the true problem lies is not with open access, but with a highly distracted society - it is much harder to get people to click on your link and buy your article these days (particularly when there are so many cat videos out there), causing journals and news sources alike to prefer "exciting" research, sometimes at the expense of quality and honesty.  In fact, when Bohannon conferred with scientists on his study, he was told that he likely would have uncovered a very similar pattern if he had submitted to traditional journals.

The cost of publishing in an open access journal is often the major drawback: PLoS and BioMed Central charge anywhere from $1275-2900 (USD) as an article processing fee.  The processing fees are used to improve the electronic tools for manuscript editing/formatting and peer-review, securing inclusion in PubMed, CrossRef, and other archives immediately, and of course, for the open access of the article.  These fees are seemingly a barrier for researchers in developing countries, right?  Well, actually, these two publishers provide automatic wavers for researchers in low-income countries, based on a wavier fund provided by the publisher.  These initiatives provide a means for researchers in developing countries to participate more fully in the global research community.

In fact, it is the traditional means of publication that tend to be more exclusive toward research originating in developing countries.  In 2009, Richard Horton, Editor of The Lancet, was quoted as saying that a medical journal's impact factor (how often articles published in that journal are cited in subsequent publications) is drastically decreased when precious journal space is given to researchers from countries with the biggest health challenges.  That's because many of this research focuses on "neglected" diseases, that are not often studied and therefore not often cited.  However, the emergence of open access publishers like PLoS and BioMed Central has re-conceptualized the idea that impact factor relates to journal quality.  In fact, most journals who switch to an open access format see an increase in their impact factor - because they're articles are made public and accessible, and therefore easier to cite.

I personally believe that open access is the future of science publishing.  Naturally I love the idea of being able to retain copyright for my research, and making it accessible to everyone, regardless of their access budget.  Understandably, the added cost may put researchers off when considering where to publish their work.  But many research institutions are taking steps in the direction of open access, some by re-routing funds that would be used in journal subscriptions toward paying article processing fees.  So long as the peer-review and quality control processes remain in place, I think open access publishing is absolutely necessary in the expansion of scientific research and knowledge.

In honor of OpenCon 2014, I will spend the week highlighting research published in open access journals.  For more information this weekend, you can watch OpenCon at this link, or check out their website and twitter feed.
Posted by Dominique at 11:13 AM

This Month's Most Popular Posts

Dominique
Thanks for stopping by! This blog is dedicated to spreading science to the masses. I take exciting new research findings and interpret them in a way that's accessible to everyone. As often as possible I will try to use research findings that are published in open access journals. On occasion, I throw in some policy context, just so my policy skills don't get rusty. So peruse, learn something new, and enjoy!